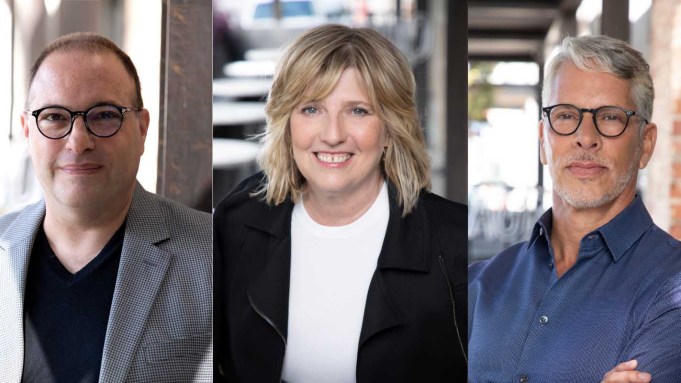 Independent entertainment company AGBO is expanding its executive team with the additions of Scott Nemes as president of television, Rik Toulon as general counsel and Marian Koltai-Levine as president of marketing and communications.

Founded by Anthony and Joe Russo and Mike Larocca, AGBO’s upcoming slate includes Netflix’s “Extraction 2” and the highly anticipated action thriller “The Gray Man,” as well as “Citadel,” from Amazon Prime Video. The studio was also behind the recent blockbuster hit “Everything Everywhere All At Once.” The new hires follow AGBO’s significant minority investment from gaming pioneer Nexon.

“We are thrilled to welcome Scott, Rik, and Marian to our AGBO team,” said AGBO CEO Jason Bergsman. “They each bring valuable skills and experience that will meaningfully contribute to AGBO’s success.”

In his new role, Nemes will oversee business and creative strategies of AGBO’s work in episodic series. He was most recently executive vice president, creative acquisitions and international development for Universal Studios Group. Prior to his work with NBCUniversal, Nemes served as EVP of development and current at Universal Cable Productions, overseeing scripted series including “The Girl From Plainville” and “Gaslit.”

Koltai-Levine will lead the company’s marketing development and all publicity and communications strategy, coming to AGBO after 13 years at Rogers & Cowan/PMK. There, she headed the agency’s film and entertainment division, most recently as president of film content and marketing. She represented industry players including the Russo Brothers and AGBO.

Toulon will be responsible for AGBO’s business and legal affairs and corporate legal matters. With more than 25 years representing and advising entertainment clients, Toulon comes to AGBO from CBS Films, where he was EVP and General Counsel. He was previously an equity partner at Katten Muchin Rosenman LLP.

“This trio of talent will build the next foundation of AGBO’s expansion and successes,” said Larocca and AGBO president of creative Angela Russo-Otstot. “Each, in his or her own right, would be a tremendous addition to our team. The three, together, represent a powerful force for change and growth.”