From ‘The Gray Man’ Sequel to Live-Action Fantasy Puppets, the Russo Sister Takes the Lead at AGBO

It’s a clear, windy day on the Atlanta set of the sci-fi adventure “The Electric State,” Joe and Anthony Russo’s latest film for Netflix through their independent studio, AGBO. While the brothers direct Millie Bobby Brown and Chris Pratt inside one of the soundstages, their youngest sister, AGBO’s newly promoted chief creative officer, Angela Russo-Otstot, is spreading some good news in the trailers parked outside about one of the company’s executives, senior vice president of physical production, Ari Costa.

“Ari’s a papa!” Russo-Otstot proclaims to Costa’s boss, Jake Aust, who works in the trailer next to hers. She shares all the fun new-baby details — name, time of birth — and she and Aust banter about the kid’s possible nicknames. Then, without missing a beat, Russo-Otstot pivots to check in with Aust about another AGBO project, “All Fun and Games,” an independent horror film Costa co-wrote and directed with Eren Celeboglu that’s in post-production. They agree a key section is leaning a bit too much on needle drops and voice-overs. “I think the note behind that is they work against the horror, right?” Russo-Otstot says as Aust nods.

It’s a typical exchange at AGBO, intermixing the creative work of the studio with deeply felt personal connections that go back years, even decades: Costa got his start 11 years ago as the Russo brothers’ assistant, and Aust met Joe Russo in the mid-1990s when they were both graduate students at Case Western Reserve University’s drama school. AGBO’s co-presidents of story, screenwriters Christopher Markus and Stephen McFeely, wrote all of the Russo brothers’ films for Marvel Studios, as well as their AGBO projects “The Gray Man” and “The Electric State.”

And as the youngest sibling by six years, Russo-Otstot, of course, has known her brothers her entire life.

“We have a sister who’s right behind them — one, two, three in a row,” she says. “And then I was the bonus that came along later.” In high school, Russo-Otstot, now 44, helped her mother cook the crew dinners for her brothers’ directorial debut, “Pieces,” which they shot in their hometown of Cleveland (where their sister, Gabriella Russo Rosalina, still works at the family law firm). After studying theater at Syracuse University, Russo-Otstot considered pursuing acting, but “about three weeks of auditioning” in Los Angeles was enough to make her realize she much preferred to remain behind the camera.

She wrote on shows like FX’s “The Shield” and ABC’s reboot of the alien invasion drama “V,” and occasionally, she worked with her brothers. (She has a cameo in 2014’s “Captain America: The Winter Soldier.”) It was a little surprising to her when Joe and Anthony asked her to join them at AGBO — at the time, she was teaching screenwriting and playwriting at Case Western and the Cleveland Institute of Art — but she relished the opportunity all the same. 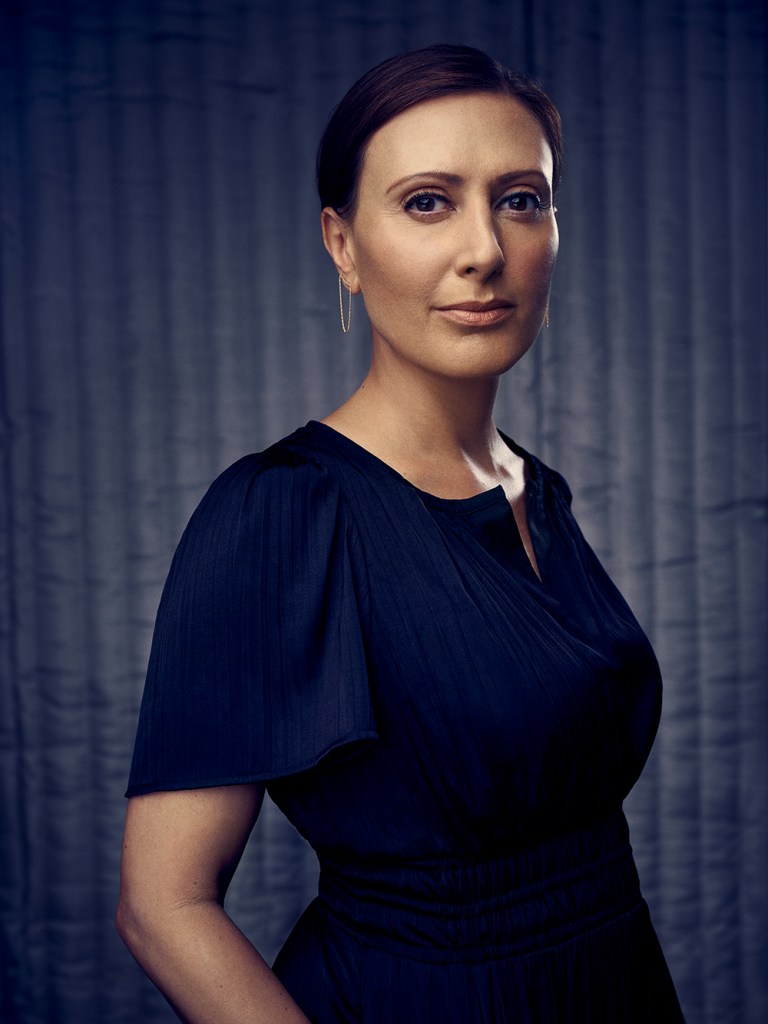 “It sounds corny, but it’s true: Not only do I admire them as creatives, but I deeply love them,” she says. “So it’s the best of both worlds to be working with somebody that you have both of those connections with.”

With her brothers often focused on directing projects for AGBO, Russo-Otstot runs the day-to-day creative engines at the company with co-founder and vice chairman Mike Larocca. Joe and Anthony, however, are still a regular presence, even when they’re not physically at the sleek downtown offices.

“Their bandwidth is tremendous,” Larocca says of the brothers’ ability to multitask. “They’re super hands-on.”

Russo-Otstot says her siblings have always been that way, and further developed that muscle during their years directing television — including Fox’s “Arrested Development,” NBC’s “Community” and ABC’s “Happy Endings” — in the 2000s.

“There was a point when they were on multiple series at the same time, and they had a couple going at the Paramount lot,” she says. “They would have two golf carts, and they would pingpong around the stages that they were on.”

Russo-Otstot is not alone in being thrown into the deep end by her brothers. “I came up as a producer in post-production on television, working mainly on sitcoms,” Aust says. “All of a sudden, Joe is introducing me as the head of physical production at AGBO, which nobody else was going to hire me to do, given my résumé.” He laughs. “Joe was like, ‘You just need some time. You’ll figure it out.’”

That kind of leap-before-you-look spirit was there from AGBO’s inception. In 2015, the Russos launched a more traditional company called Getaway Prods. under a firstlook deal at Sony, with Larocca, who’d been a Chernin Entertainment executive, installed as president. But they grew impatient with the limitations of being at one studio, especially as streaming began to dominate — and transform — the industry.

“We knew that wedding ourselves to anything was potentially problematic,” Larocca says. “So when the opportunity to capitalize the company to become independent presented itself, it was a no-brainer.” China’s Huayi Brothers Media Corp. agreed to a $250 million investment in 2016; by the next year, AGBO was born as a fully independent entity.

“There’s a content arms race, and if you can be an arms dealer, that’s a good place to be,” says Larocca. “That was the idea.”

AGBO’s approach is driven by an abiding belief that the future of entertainment is global, and the Russos’ experience with Marvel Studios has afforded them the ability to identify and build out widely popular franchises.

“How are we reaching the broadest audience possible here?” Russo-Otstot says of the question driving creative thinking at AGBO. “That creative challenge is fulfilling, because we want to cross borders — we want to have global resonance.” 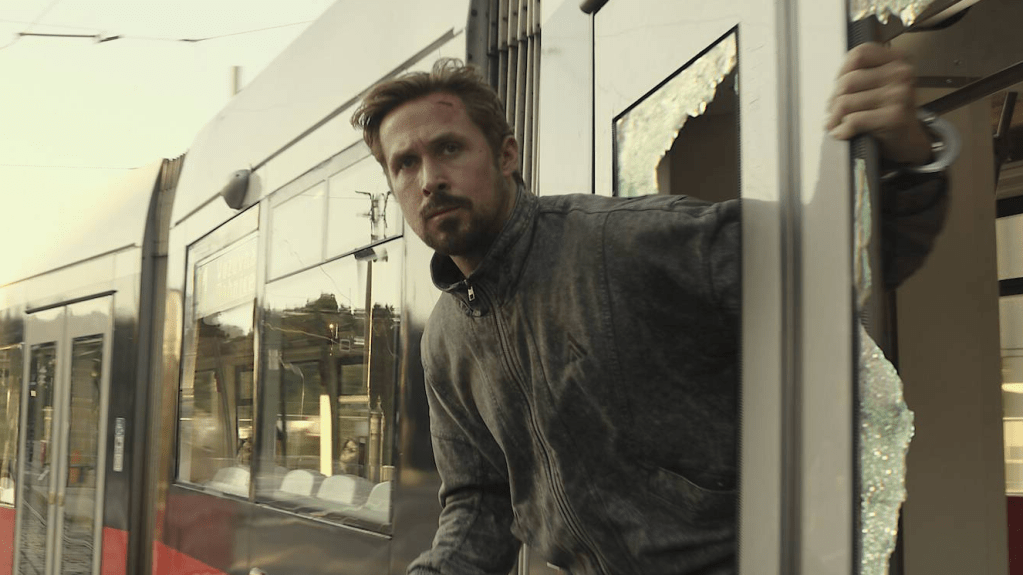 For Netflix, along with “The Electric State,” AGBO is actively developing two spinoffs of “The Gray Man” — a sequel written by McFeely and a prequel with “Deadpool” screenwriters Rhett Reese and Paul Wernick. Those projects remain the best indicator AGBO has that “The Gray Man” was financially profitable for the streamer, given how little Netflix reveals of its internal measurements of success beyond its public Top 10 list.

“We tear our hair out like everyone else trying to understand the metrics, but by all the external metrics that they share, we’re doing great,” Larocca says with a shrug. “There is no bigger endorsement of success than repeat business.”

That’s also true of AGBO’s partnership with Amazon. Their first project together is “Citadel,” a wildly ambitious spy thriller TV series starring Priyanka Chopra Jonas, Richard Madden and Stanley Tucci that will debut in 2023. A local-language spinoff set in Italy is already in production, with an Indian version close behind and other locations likely to follow. And Amazon snapped up the “Butch and Sundance” reboot series with RegéJean Page and Glen Powell that came together fast.

“That was us in-house, talking about ‘Wouldn’t it be fun … ,’ which is how a lot of our ideas start,” Russo-Otstot says. She describes the show, which takes place in an alternate history, as “a summer tentpole film in an event series” that has “a global take, so it will speak to audiences worldwide.”

Not all of AGBO’s projects have such obvious tentpole prospects, however. They’ve got two independent productions — the supernatural thriller “The Whisper Man,” with director James Ashcroft (“Coming Home in the Dark”), and the period pirate thriller “The Bluff,” with star-producer Zoe Saldaña and director Frank E. Flowers. For A24, AGBO helped to develop “The Legend of Ochi,” the directorial debut of animator Isaiah Saxon, set in a live-action fantasy populated with puppets (think “Labyrinth”). And the studio has partnered with Netflix and Barack and Michelle Obama’s Higher Ground Prods. on a feature film adaptation of “Exit West,” the novel by Mohsin Hamid about a couple escaping their country’s civil war by using doors that allow them to step directly into other places in the world. Riz Ahmed is attached, and AGBO is seeking a new director after French-Algerian filmmaker Yann Demange exited the project.

If that weren’t enough, AGBO is also the rare company to partner with Disney, producing two projects for the studio: the animated feature film “Fudge,” based on the Judy Blume books, for Disney+, and a live-action adaptation of “Hercules” with director Guy Ritchie that, yes, will be a musical.

“I think the sky’s the limit with us,” says Russo-Otstot. “We always think we’ll get to the place where we cry uncle, but we don’t.”