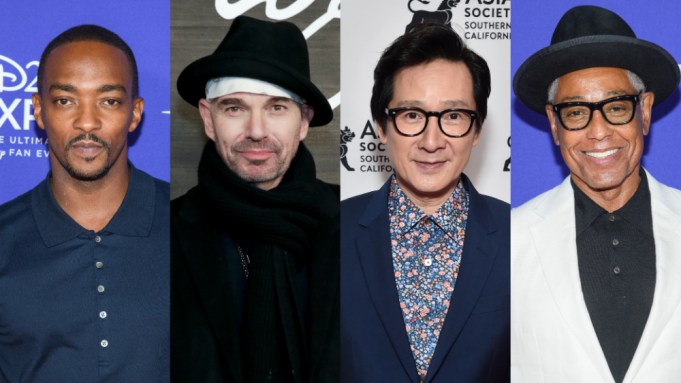 Directors Joe and Anthony Russo are expanding the cast of “The Electric State,” their next film for Netflix, with Giancarlo Esposito (“The Mandalorian”) and Ke Huy Quan (“Everything Everywhere All at Once”). Anthony Mackie (“The Falcon and the Winter Soldier”) and Billy Bob Thornton (“The Gray Man”) have also signed on in voice roles.

Set in an alternative America in the mid-1990s, “The Electric State” stars Millie Bobby Brown as a young girl traveling across the country in the wake of a civil war between humanity and the robots that once served them, looking to find her missing brother. Chris Pratt costars as a smuggler she meets along the way; Stanley Tucci and Jason Alexander round out the cast.

Esposito will play an antagonist known as the Marshall, a robotic drone manned by Esposito’s character remotely and tasked with hunting down the robot aiding Brown’s character on her quest. (The drone is played on set by a performance-capture actor; Esposito will shoot his side later in production.) Quan will play a doctor that Brown’s character needs to find; he’s taking over the role from his “Everything Everywhere All at Once” costar Michelle Yeoh, who had to depart the film due to scheduling conflicts.

Mackie and Thornton will each voice sentient robots in the film. Mackie’s character is a sidekick for Pratt’s, while Thornton voices a key figure in the civil war.

“The Electric State” is based on a book of illustrations by Swedish artist Simon Stålenhag; screenwriters Christopher Markus and Stephen McFeely first discovered the book on Kickstarter and adapted its skeletal narrative into a sci-fi adventure. AGBO approached the project with the potential to develop other spin-offs set within its larger world.

The film is currently in production in Atlanta, with an eye to debut in 2024. The Russos are producing along with AGBO co-founder Mike Larocca, and Chris Castaldi and Patrick Newall. It’s executive produced by Markus, McFeely, Angela Russo-Otstot, Jake Aust, Geoff Haley and Jeff Ford.

Quan is represented by Innovative Artists, Cohen & Gardner and Narrative.

Mackie is represented by UTA, Inspire Entertainment and The Lede Company.