Take a peek inside Hollywood's most exclusive fantasy football leagues 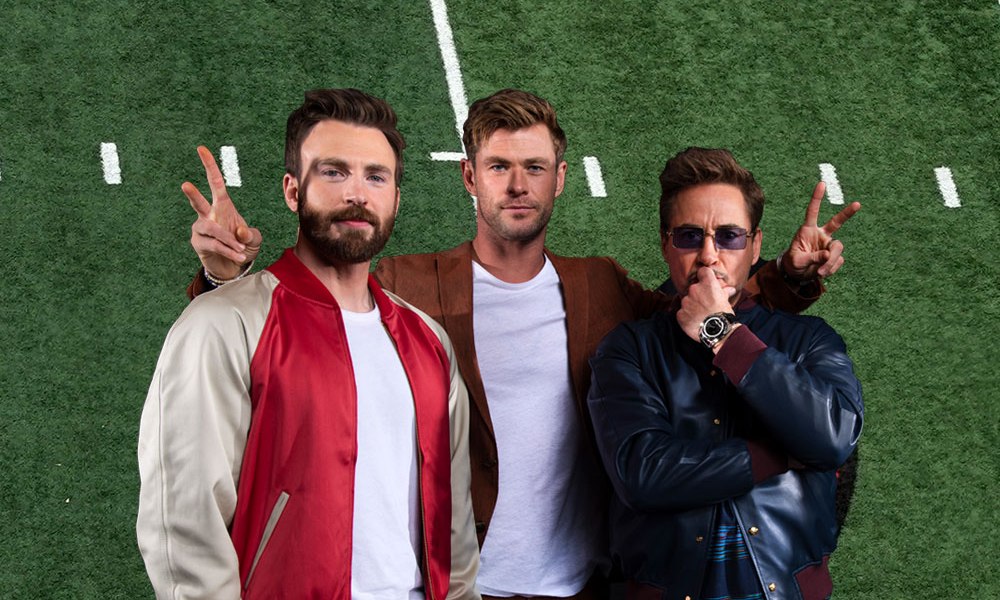 Right around early September, when many die-hard fans were stressing over their fantasy football rosters for the season ahead, 14 of Hollywood’s most famous actors were also similarly hunched over their devices,  frantically trying to lock in their picks.

“We had a real online draft,” said Guillermo Lozano, an Army vet who was working security in LA when he bonded with Chris Evans over their love of sports, eventually leading him to run the AGBO Superhero League. “Everyone got online at the same time and we had a snake style draft, with everyone putting in their picks. It was like any other draft.”

The 14-team AGBO Superhero League has too many celebrities to list, but it includes three out of the four Chrises (Evans, Pratt and Hemsworth), Robert Downey Jr., Tom Holland, Ryan Reynolds. Elizabeth Olsen, Anthony Mackie and more.

Despite the sheer amount of celebrity crammed into it, the league runs pretty much like any other league, complete with trash talk, text chains and yes, people sliding in under the wire with their picks.

“You should hear some of the excuses I get,” Lozano said with a laugh. ” ‘I’m on a glacier, I’m on set, I don’t have internet access right now, can you put my picks in for me.’ ”

The league was founded by Lozano and Joe Russo, who named it after the production company he runs with his brother Anthony. The Russos, of course, are the directors of four tentpole Marvel films, including Avengers: Infinity War and Avengers Endgame.  They are also huge football fans and dedicated fantasy players.

To understand the genesis of the AGBO Superhero League and what goes on in there, we’ve first got to use some Pym Particles and travel back in time a little bit and talk about Bloodsport. Bloodsport is the ultra-exclusive, long running fantasy football league made up (mostly) of actors who starred in Marvel movies. It is, if you will, the OG of the Marvel superhero fantasy football leagues.

As anyone who plays fantasy knows, every good league needs a good commissioner, someone who can keep the participants in line and on task. For Bloodsport and the AGBO Superhero league, that’s Lozano, a man who mostly prefers to work behind the scenes.

After five years in the Army, Lozano, a lifelong Angeleno, got started in the movie security business and through there, made a few connections. Around 2004, he struck up a friendship with Evans.

“We’ve known each other for 15 years,” Lozano, who also works as a producer in Hollywood, said. “I think the Lakers were playing the Celtics, so we bonded over that.”

When Evans wanted to start a fantasy league in 2015,  Lozano was happy to take the reins. Thus, Bloodsport was born. Lozano won’t reveal all the celebrities in that league, but it does include Evans, Paul Rudd, Pratt, Mackie and Jeremy Renner.

Quickly, the league grew in popularity and notoriety.

“It got crazy really quickly,” Lozano added. “There was a lot of interest.”

As word started to spread, more people wanted in. ESPN’s fantasy guru Matthew Berry was one of those trying to secure a coveted spot. “I kept bothering Guillermo about it at the Endgame premiere,” Berry said.

But, the Bloodsport league hasn’t and won’t swell in size, and Lozano runs it with an iron fist, with no room for slackers.

“Everyone takes Bloodsport really seriously,” Lozano said. “The trash talk in there is epic. Those guys want to beat each other every single week.”

Just how brutal is Bloodsport? Like a lot of leagues, they are not above hazing.

“We had a new guy come into the league that we got pretty good,” Lozano said without revealing names. “We made him think that there was a last place penalty and that it was very severe. It was a thing he really did not want to do. Everyone was in on the joke and it was funny to see him increasingly freak out.” The Bloodsport crew kept the gag running for a few days, before finally letting the actor in on the joke.

Because of its reputation as the elite league, and with so many people clamoring to be let in, Lozano thought about just starting another fantasy football league. He took the idea to Joe Russo and from there, things began to spiral.

“Anytime you have an idea and you take it to Joe or Anthony, they’re going to make it bigger and better,” Berry said.

The idea for a second league quickly spiraled into something more public and fun. Russo wanted the league to have some purpose, aside from just another fantasy league. Since superheroes are all about making the world a better place, the two decided to add a charity aspect to it. Every celebrity in the AGBO league is playing for a chance at a portion of a $100K donation to the charity of their choice, courtesy of the Russos and their production partners. From there, they looped in Berry and things really got rolling.

“The most important rule for joining was that you have to play,” Berry said. No one who wasn’t willing to commit was allowed. With that in mind, one weekend before the season kicked off, a flurry of texts were sent, schedules coordinated and all 14 crazy popular celebrities were online for the AGBO draft.

Lozano and Berry demure about who might have needed some help with their picks, but are open about some of what went down during the event.

“You don’t usually draft quarterbacks first so I was surprised Rudd took Mahomes as his number one pick,” Berry said. “But, he’s a huge Kansas City guy so it kind of makes sense.”

There were also disappointments, like noted New England Patriots super fan Evans not being able to snag quarterback Tom Brady.

“He ended up with Rodgers, which, for anyone else, is a good pick, but no, he was not happy about that,” Lozano said.

The league also goes in on trash talk, which is another holdover from the Bloodsport league.

For AGBO, the celebrities have all committed to weekly trash talking videos meant to not just sweeten the pot, but also draw attention to the charities they’re playing for.  Take for example, Paul Rudd’s extensive take down of Chris Pratt, or Ryan Reynolds going after Karen Gillan.

While Bloodsport has a thread that’s not for the faint of heart (“Those guys go hard,” Lozano said.) AGBO is kinder and gentler between their very public takedowns.

“It might be because it’s just the first year, and people are still feeling each other out, but everyone is too nice,” Lozano said. “It’s all like, ‘Wow, that video was really good.’ No real hard shots.”

Still, there’s one player in the AGBO league that gets dumped on more than anyone, and that’s Evans.

“I don’t know if you picked up on this or not,” Berry said, “But almost everyone who made a trash talk video found a way to make fun of Evans.”

There’s a little bit of history there that, again, goes back to the Bloodsport league.

“Here’s what you have to understand,” Lozano said. “Chris won the Bloodsport league two years in a row. Back-to-back. In my 20 years of playing fantasy, I’ve never seen that happen. It’s rare.”

Evans has also been known to crow about his triumph.

“He’s not shy about bringing it up,” Lozano said. “And he talks a lot of trash, so it’s only fair he gets it back.”

The trash talking though, is just another part of what makes the fantasy experience special and fun. For actors who are in the limelight all day, the fantasy league is, for a lack of a better word, a safe space for them to just be themselves.

“A lot of it is about trust,” Lozano said. “There’s trust between everyone in the league, and that allows people to just have fun with it and get to know each other better.”

It turns out, there’s a great equalizer between us mere mortals and Marvel’s mightiest heroes, and that’s fantasy football. Sure celebrities have better hair and better teeth and cuter dogs, but they too must suffer through the particular agony of watching someone they were eyeing for a fantasy slot get snatched out from under them, or seethe as a player they started hopelessly implodes during a game. That’s what makes it so fun.