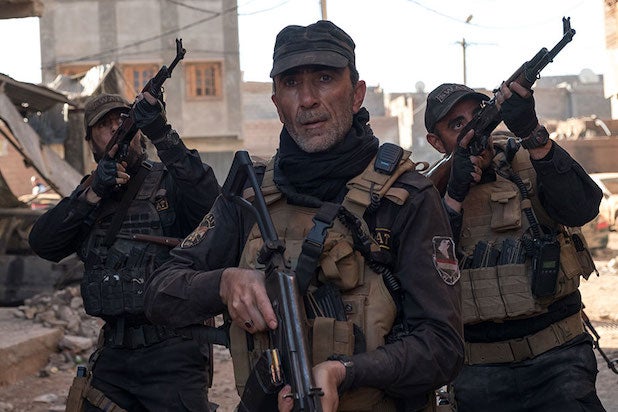 Netflix has acquired “Mosul,” an Iraq War drama funded and produced by Anthony and Joe Russo’s production company AGBO, an individual with knowledge of the deal told TheWrap. 101 Studios was originally going to acquire the war drama, but talks fell through. Netflix will release “Mosul” in November 2020.

Matthew Michael Carnahan, who wrote the AGBO film “21 Bridges” starring the late Chadwick Boseman, wrote and directed “Mosul.” It’s inspired by an article in The New Yorker by Luke Mogelson about the Nineveh SWAT team, an elite police squad of soldiers composed of local Iraqis all fighting ISIS. The drama first premiered at the Venice International Film Festival, followed by Toronto.

Waleed Elgadi, Suhail Dabbach and Adam Bessa star in the film as a police squad moving block by block to reclaim their city from ISIS, all while nursing their own personal traumas at the hands of the terrorist group.

“Mosul” was shot in secret on location in the Middle East in 2019, and “Avatar” cinematographer Mauro Fiore shot the film.

In TheWrap’s review of the film, critic Ben Kroll wrote that “Mosul” is more than just a brawny action epic. It earns a spot on this year’s festival circuit if only for the way it rejects some of the industry’s most pernicious received wisdom. Carnahan does away with any All-American stand-ins, and never tries to shoehorn in some hunky Midwestern savior. Without deviating from the war-thriller playbook, this Hollywood film offers a frontal assault on the mistaken belief that U.S. audiences cannot identify with characters speaking other languages.