Kassee Whiting has been promoted to svp of film, while former Universal Content Productions exec Alessandra Mamán has been hired as vp of television. 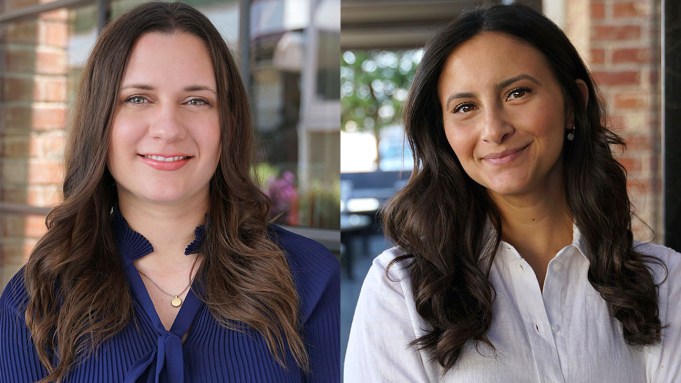 AGBO, the independent production banner headed by Anthony and Joe Russo and producer Mike Larocca, has upped Kassee Whiting to svp of film and has hired Alessandra Mamán as vp of television.

Whiting, who joined AGBO in 2018 after positions at Open Road and Summit Entertainment, recently produced the high-concept horror-thriller All Fun and Games, starring Asa Butterfield and Natalia Dyer. In her new role, she will help manage the development of a film slate that includes the Guy Ritchie-directed live-action Hercules for Disney and the Chris Pratt-starrer Bodyguards for Universal, as well as oversee films through the company’s Gozie Agbo banner, which focuses on smaller budgeted genre fair from early-career filmmakers.

Whiting will also continue to oversee some of AGBO’s filmmaker initiatives, including Slamdance Film Festival fellowships.

Mamán joins AGBO from Universal Content Productions. During her seven years at UCP, where she most recently served as director of scripted development, she amassed credits that include Peacock’s Dr. Death, Netflix’s Brand New Cherry Flavor and Hulu’s The Girl from Plainville.

“Kassee seamlessly tows the line of building out star-driven, elevated, event films for a global audience while seeking out new, innovative, and underrepresented voices to champion through Gozie Agbo,” said Russo-Otstot. “Her remarkable passion and care for the talent she works with speaks directly to our mission of being creative first, making her a true asset to our partners as well as our studio at large. I am thrilled to continue this journey with her.”

“I have worked with Alessandra for many years and she is a wonderfully talented person and a tireless worker,” said Nemes. “She is the ideal person to come and work with me in building AGBO’s television slate. I am so excited to have her join the team.”

AGBO will soon release the Netflix feature The Gray Man, starring Chris Evans and Ryan Gosling, and is currently in theaters with A24 break-out Everything Everywhere All At Once, the Michelle Yeoh starrer from The Daniels.