THE BEST ACTION MOVIE OF 2020 HAS A TIMELY POLITICAL MESSAGE

Some of the best stuff on Netflix wasn’t made in America. Joining that elite list this week is Mosul. 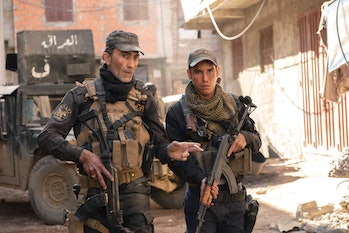 Set in the waning days of the Iraq War, the movie stars a cast of Middle Eastern actors speaking in the same Arabic dialect used by the soldiers the story is based on. Mosul was also produced by Anthony and Joseph Russo, the director duo behind Avengers: Endgame, who used the success at Marvel Studios to launch a production company and make the types of films they love that no longer exist. The Russos weren’t just silent producers, either. As Mosul director Matthew Michael Carnahan tells Inverse, they championed his vision despite its uniqueness as a “healthy budget” action movie without a word of English spoken.

“They bring fearlessness and a desire to tell different and authentic stories,” Carnahan says. “I’m still sort of stunned and forever grateful that they, without hesitating, thought that was the only way we could make this movie, and they backed me in a way that I never expected.”

Mosul shows it. At a tight 101 minutes, the movie rarely lets up, shifting seamlessly from explosive action to dark drama as an Iraqi SWAT team works to clear ISIS holdouts out of the northern city that gives the movie its name. One minute, guns are blazing as the SWAT loses one more member. Moments later, they’re tensely negotiating with an Iranian general to trade cigarettes for ammunition or trying to convince a pair of orphaned Iraqi boys to leave their dead father by the side of the road and hitch a ride to safety.

It might sound exploitative, but it works. Mosul is based on a true story, and it’s anchored by its two leads, a grizzled ex-cop who leads the SWAT played by a swaggering Suhail Dabbach and a young recruit learning to kill on the job played by Adam Bessa. Dabbach is every detective who’s one day from retirement (if you catch my meaning), even though he knows his life will never return to normal. Bessa plays the other side of that coin, an innocent soldier who we watch transform into a ruthless killer in real time.

The entire cast brings that same energy, and it's no coincidence. Bessa tells Inverse they kicked off production with a three-week boot camp alongside some of the soldiers they play, and recalls one particular moment that prepared him to take on the roll.

“After maybe one week and a half of boot camp, we were in a tent and I asked, ‘What’s the emotion you get when you kill someone?’ And the soldier goes, ‘Get out of the tent.’ He wouldn’t answer me. For the whole shoot, he didn’t want to answer me.”

Eventually, Bessa got his answer, but he wouldn’t share it with me. Maybe some things are better left unsaid.

Watching Mosul as news of the 2020 US election arrived in dribs and drabs, I couldn’t help compare this story of civil war to the one so many pundits and politicians had been warning might happen in America. Carnahan agrees.

“I’ve thought about this movie in relation to the election,” the director says. “It’s so much easier to get into this situation than any of us really realized, and it’s damn near impossible to get out. Once it’s broken, it’s almost impossible to put it back together.”

Adds Dabbach: “We don’t need bad people to take us down. We need good people to bring us up.”

You might not watch Mosul and get all that. It might just feel like a Call of Duty mission come to life or another movie glorifying military violence from the guy’s behind Captain America’s rise to the top of popular culture. But unlike the Marvel Cinematic Universe, Mosul wears its political message on its sleeve.

It’s right there waiting for you, just as long as you don’t mind reading the subtitles.

*MOSUL IS STREAMING ON NETFLIX*