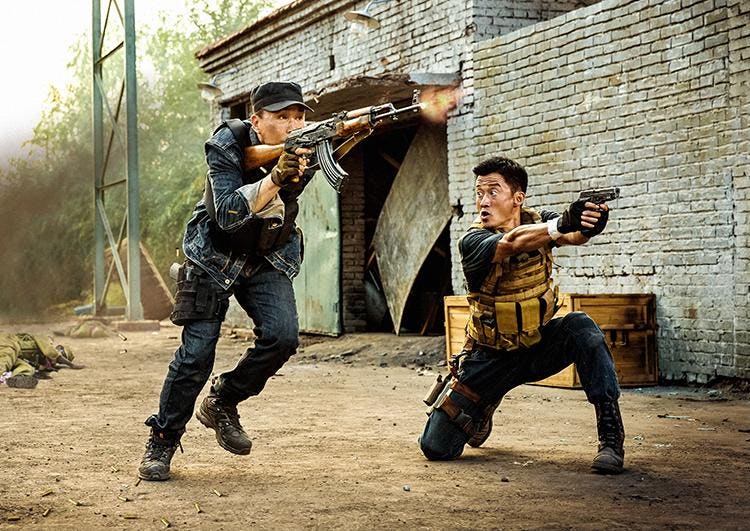 Up until a week ago, I could tell you that the “Holy sh**!” story of the summer was Warner Bros./Time Warner Inc.'s Wonder Woman and its obscenely leggy race to $400 million+ domestic. And in terms of Hollywood movies kicking butt in North America and around the world, it is unquestionably the biggest story of the summer. But over the last two weeks, there has been another huge story in terms of a potentially game-changing release. Wolf Warrior 2 opened the weekend before last opened with a huge, but not necessarily record-setting $136m. That's fine and dandy, even with the mere 15% drop from Saturday to Sunday and a 2.9x weekend multiplier. But then the picture earned $41.5m on Monday, $42m on Tuesday, $41.4m on Wednesday and $31.6m on Thursday, giving it a week-long $307.3m running total and a Mon-Thurs total ($156m) larger than the film's opening weekend. And it made another $161m in its second weekend, a jump of nearly 12% from its debut.

In just 13 days of release (including Thursday previews), Wolf Warrior 2 has earned a whopping 3.88 billion yen (including online ticketing fees), or around $570 million dollars in China. First of all, that $161m second weekend is the biggest non-opening weekend for any movie in any territory, ahead of Star Wars: The Force Awakens' $149m Fri-Sun sophomore frame in Christmas of 2015. Second, the film has already eclipsed Stephen Chow's The Mermaid (3.32 billion yen/$526m) to become the biggest-grossing movie ever in China, as well as the biggest-grossing movie ever outside of North America.

And in terms of land-speed records, it is the second-fastest grosser ever save for Star Wars: The Force Awakens which earned $629. million in its first 13 days of domestic release following a $247.9m Fri-Sun opening weekend. For comparison, Jurassic World had $4337m in its first 13 days after a $208m debut weekend. And, with inflation and exchange rates notwithstanding, every single day of Wolf Warrior 2's box office since its first Sunday has been larger than the respective day for the J.J. Abrams sci-fi sequel. Heck, its first Mon-Thurs grosses have set a new single-territory record for any movie anywhere outside of the handful of films that had their respective opening days on Wednesday or Thursday.

You know where I'm going with this. With a "domestic" Chinese total that already exceeds every North American grosser save for Walt Disney's The Avengers ($623 million), Universal/Comcast Corp.'s Jurassic World ($652m), Paramount/Viacom Inc.'s Titanic ($658m), 20th Century Fox's Avatar ($749m) and Walt Disney's The Force Awakens ($936m) after less than two weeks of play, it is now entirely possible that this big-budget action-adventure movie will supplant The Force Awakens as the biggest single-territory grosser of all-time. And even if it does slow down or drop dead, it's all but certain to end up as the biggest single-territory grosser for any movie not directed by James Cameron or J.J. Abrams.

It may be just under $600 million mark by the end of Thursday (today, thanks to time zone magic) as it heads into its second weekend, and even a 50% weekend drop would be an $80m Fri-Sun frame and a new over/under $680m Chinese total. So yeah, anything resembling legs for the next few weeks means a new box office champion in terms of a single territory. Moreover, it is entirely possible that Wolf Warrior 2 will be the summer's biggest global grosser entirely on the strength of China alone, depending on where it and Despicable Me 3 fall in worldwide grosses.

So, you're probably asking "What the hell is Wolf Warrior 2?" Well, the reason this is a few days late is that I actually wanted to watch this movie (and its predecessor) before writing about it.  Wolf Warrior 2 is a sequel to the 2015 hit Wolf Warrior, which was essentially a mid-budget variation on Navy Seals or Act of Valor. It was a 90-minute military adventure about an elite group of Chinese special forces-type soldiers who must save the day when they are targeted by a ruthless drug lord and are hunted by a paid assassin (played by Scott Adkins, of DTV action fame). The picture earned a not-insignificant $89 million two years ago, but this sequel is something else entirely.

This sequel, which like its predecessor is directed by and stars Wu Jing, is a $30 million action spectacular. It looks gorgeous, features some jaw-dropping stunt work and action sequences (the Russo Bros., of MCU fame, assisted as consultants) and operates as a distinctly Chinese version of the kind of big-budget action spectaculars that were once Hollywood's bread-and-butter before it shifted to comparatively bloodless fantasies about wizards and superheroes. Wolf Warrior is a real-world (and incredibly violent) action adventure when Chinese heroes save the day.

It's also, for what it's worth, deeply nationalistic and very much a Chinese version of the "White savior" trope. It's not hard to see why this picture has been so successful. In the heroic Leng Feng, it essentially gives China their own version of John Rambo (from the sequels) or Jack Bauer, an uncompromising lone wolf action icon who can save the day almost entirely by himself while (absent the self-criticism and shades of grey found in the Rambo series and 24) representing the inherent superiority of his country (and, if you want to get icky, his race). Yes, it's a celebration of its country of origin, but it also features an unusually individualistic hero.

It's easy to argue that Wolf Warrior 2 is China's answer to a Michael Bay movie, but frankly, the more accurate comparison is the bigger-budgeted films from Antone Fuqua. The film feels like the bastard love child of Tears of the Sun (only Chinese heroes can save nameless Africans and the Chinese female doctor trying to save lives from being slaughtered by rebels in their own country), The Equalizer (one man can crush the evil foreigners doing harm to native citizens and those who otherwise cannot defend themselves) and Olympus Has Fallen (a good 30-40% of the running time is spent with sequences of bad guys just slaughtering African and Chinese civilians in graphic detail). I'll be shocked if Fuqua doesn't end up helming the (theoretical) English language remake.

If you approach this film with any kind of thematic/textual level, it's going to be quite offensive and not a little unpleasant. It's very much a He-man ode to manly men who can save the day, even if other manly men are the ones who put it in peril in the first place. No spoilers, but the women (including Celina Jade as a doctor trying to save lives in the midst of a massacre) are not treated well here. The violence is horrific to the point of self-parody, but it is all played very seriously. The Africans are either helpless victims, cannon fodder, bloodthirsty slaughterers or inferior would-be protectors of their own people.

In a sense, the film, which makes a point to feature lead baddie Frank Grillo noting that he underestimated the Chinese army, is no more nationalistic than The Great Wall (or American Sniper for that matter), but there is a difference between watching an ancient Chinese army school Matt Damon on how to fight monsters and watching the kind of movie that plays out the same nationalistic fantasy with real-world horrors and real-world carnage. Now having said all of that, there are plenty of folks in China (and elsewhere) who will approach it merely as a surface-level action movie.

And in that sense, it's pretty darn successful. Sure, the movie essentially boils down to "civilians get slaughtered, Leng Feng fights off the baddies, repeat" right up until the extended action climax which involves a tank chase, brutal hand-t0-hand combat and a slightly offensive moment of a major black character singing "Amazing Grace" during a moment of defeat. But the shootouts, fight sequences and vehicular mayhem are unquestionably impressive. This is pure exploitation fare, to be sure, but it's also going to be absolute paradise for those who relish hardcore action movies and don't care about the politics. Sure, it's essentially Problematic: The Movie, but I'm the guy who appreciated and enjoyed Olympus Has Fallen, even if A) White House Down is vastly superior and B) London Has Fallen is a piece of racist fear mongering garbage.

Yes, there is a certain appropriately cruel irony that this deeply jingoistic/bloodthirsty offering has outgrossed Stephen Chow's empathetic and cheerfully goofy "save the environment" comedy The Mermaid, and it's not hard to see why the film is doing so well, even accounting for its release date during a Hollywood black out period. Honestly, the closest comparison I can think of for this film's blow-out success is Terminator 2: Judgment Day, whereby a well-received and moderately successful actioner gets a mega-budget sequel that becomes a phenomenon entirely unto itself. If you recall, The Terminator earned $39 million domestic in 1984 on a $6m budget, but the $100m sequel, the most expensive movie ever made at the time, earned a stunning $204m domestic and $519m worldwide (behind only E.T.: The Extra Terrestrial and Star Wars at the time).

We'll have a pretty good idea of how this turns out within a week or so. But this is absolutely one of the big box office stories of the year. You'll be hearing more about this one in the near-future, so I wanted to take a moment to see it and tell you about it before it became one of the very biggest-grossing movies of all time. Oh, and thanks to Jonathan Papish of China Film Insider for providing the daily updates and for answering my pesky questions to make sure my analysis was sound.