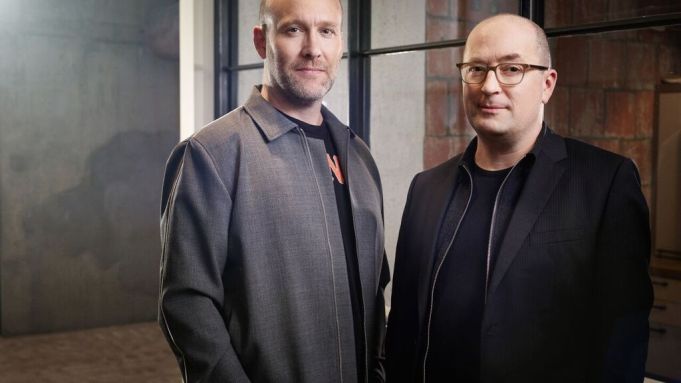 Joe & Anthony Russo’s AGBO has named screenwriters Christopher Markus and Stephen McFeely to become partners in their monied studio venture. The writers will take the titles of Co-Presidents of Story, and will shepherd a growing list of projects even as they write one tent pole-sized film per year and a passion project every other year for AGBO. They are added to an exec roster that also includes COO Todd Makurath and production president Mike Larocca.

The Russos have been slowly building a slate and headquarters as they multi-task shooting and editing two Avengers sequels for Marvel.  They finally fixed on the name AGBO, which relates to the screen credit – Gozie Agbo — that former actor Joe Russo uses when he plays bit roles in their films. It isn’t surprising that the Russos would want to extend a creative collaboration with Markus & McFeely. The quartet has spent the past seven years together on Captain America: Winter Soldier and Captain America: Civil War, and the two Avengers sequels the Russo’s shot back-to-back. The first of those, Avengers: Infinity War, bows through Disney and Marvel on April 27, with the second to follow May 3 2019. What is surprising is that after writing four of the biggest scale movies made by a major studio over the past nine years, Markus & McFeely would essentially take on the role writers usually call a “suit,” an executive there to be endured as much as anything.

“It’s funny you bring up the word suits, because the reality is this involves us talking to fewer suits than writers usually have to,” said Markus. “A writer finishes a project then has to find another to go sell in every office in town, hoping it gets picked up. It’s daunting, and it’s a lot of non-productive time. One of the reasons we stayed with Marvel so long is, it’s such an efficient machine. There aren’t many people to talk to, things get talked about and they happen. They don’t get put on a shelf. To be able to carry that pace and process onward was really appealing.”

Markus & McFeely understand their greatest value to AGBO is their output of commercial movies as writers, just as the Russo Brothers understand their success as directors will determine how high this venture flied. But the writers will also be fully functioning creative execs on hand in the nearly completed AGBO facilities in downtown LA’s fashion district, to nurture the storytelling process that they all consider to be the cornerstone of the new company. As Deadline broke last month, Markus & McFeely’s first major screenplay will be to adapt The Electric State, an illustrated novel from Simon Stålenhag which the Russos won in a bidding war last December, with the It team of director Andy Muschietti and Barbara attached. The Russos and Muschietti’s will produce together. It will be a big budget film.

The Russos said their film program will be divided into three categories: prestige projects (they are financing the next film by Swiss Army Man writer/directors Daniel Scheinert and Daniel Kwan (aka The Daniels); elevated genre (the Sam Levinson-directed Assassination Nation, which they acquired at Sundance with 30WEST, fits here), and tent poles like The Electric State. The Russo said that Markus & McFeely demonstrated in high pressure situations they have the flexibility to be helpful developing solving problems on other projects even as they tasked with their own colossal superhero scripts.

“Not only did we make four movies with them at Marvel, we watched them help Marvel with a variety of their other films,” Anthony Russo told Deadline. “We had this experience within Marvel where you’re dealing with a vast number of movies, a large amount of storytelling, and we were able to see their abilities. It wasn’t just making four movies, it was incorporating other franchise narratives. We saw their fluency in dealing with Thor, Guardians of the Galaxy, Iron Man, Spider-Man and Black Panther, a character that was introduced in the last Captain America. We got a dry run with them over several years. We’re done with our run at Marvel, when we deliver that movie next year. We will have spent seven years with Marvel, and they predated us and were there nine years. We’ve spent a bulk of our career working out a process together that is actually what we hope to do here.”

While the quartet can’t hope to replicate the success of Marvel, they will incorporate some of the culture lessons they’ve learned there. All four said that Kevin Feige presides over the most efficient character-based storytelling machine Hollywood has ever seen, and they believe that having creatives atop the company who’ve cracked plots and solved story problems under deadline pressure will help empower talent to do their best work. The Russos have the financial resources to compete with studios for new IP like The Electric State: China-based Huayi Brothers were a ground floor investor when the Cleveland-raised siblings first lay the groundwork for the venture in 2016.

“I hold no claims to be able to translate Marvel’s success anywhere else, but I’ve observed that it’s a unique combination of leadership, staff and IP,” Markus said. “It is also that they make one movie at a time. They don’t say, we’re building an empire of 16 films, here’s when they will come out. That is crazy talk that results in one bad movie and no empire. You have to make one movie the best it can be, completely regardless of any other movie. So you are not holding something back for a future movie that robs the one you’re making, and you can’t say, this doesn’t have to be that great because you are building toward something. Each has to be a great free-standing film or you will never get there.”

“It’s all about character,” McFeely said. “We’ve always said, we don’t write for Captain America, we write for Steve Rogers, and the idea has been we don’t work in the superhero genre, but rather in genres where there are superheroes. To us it has been about human beings and the decisions they make. That is why we’ve made a good team with the Russos. That is all they’re about. I can’t tell you the meetings we’ve had where Anthony just won’t get off a point because it doesn’t make sense for this character for one damn minute. We’ve been rigorous about this stuff.”

Markus & McFeely said they were equally rigorous about deciding to make this move, even though it allows them to write the occasional project outside of AGBO.

“The brothers came to us in Christmas 2016 with the idea and we said, ‘wait. You want us to be what? Executives? Stop it. Terrible idea,” said McFeely. “Then in January 2017 we started shooting these big movies. I am in a corner reading a magazine article on my phone, in between set ups. I told Joe and Anthony how much I loved it. They go, ‘uh huh.’ Before I get to work the next morning, I get an email: ‘we bought it.’ Nothing in our careers ever got done that fast. Not when you have to find out who owns the rights and get your agents to find the money to do anything.

The upside of being inside a machine that has capital, where you are surrounded by people you trust, this was eye opening to us,” McFeely said. “The idea we can have a hand in more than one project at a time, that always kept the Marvel experience fascinating for us., We’d do rewrites on other things, add our two cents where we can help. The idea we can step into a thriller for a few days and try to crack something, and go over there into a children’s movie, that’s all we want to do, be writers who work on everything. This allows us to do that.”

For Joe Russo, ensuring there are top storytellers in-house to help the filmmakers they’re bringing in is the way the brothers hope to distinguish their company.

“The hope for a progressive studio is to try to occupy a spot amidst disruption, and find a path through it,” he said. “Sometimes it takes artists to choose that path, or a strong producer voice. It usually doesn’t come out of a corporate culture; they tend to follow trends rather then set them. We see a risk taker’s market right now, and feel there’s nothing worse than a fastball down the middle because people have become too savvy. Game of Thrones trained audiences to look away from the middle. Their characters can die. It’s exciting when you narrow the target because when you hit it correctly, you can have a massive amount of impact. Thematics are more important now than at any time since the 70s. The state of the country is such that people want to hear things said that make them think, and feel important to them. Black Panther has done that as successfully as any commercial movie in history. On top of it being so well shot and acted, that is the driver. It’s part of the disruption of the market right now, because thematics don’t usually drive commercial movies.

“Markus & McFeely will help with all of this,” he said. “We’ve had an incredible working relationship over four movies and they’re the best writers in town, as smart about storytelling as anyone we’ve worked with.”