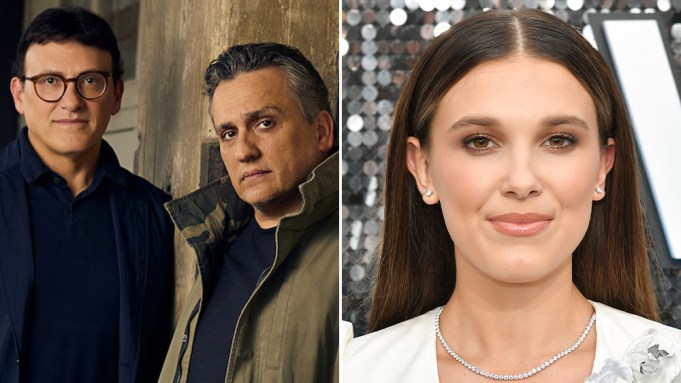 Netflix looks to be reuniting with some familiar faces as sources tell Deadline the streamer has come on to Joe and Anthony Russo’s next directing feature The Electric State, which has Millie Bobby Brown set to star. Christopher Markus and Stephen McFeely adapted the script, with the Russos and Mike Larocca producing for AGBO. Chris Castaldi and Patrick Newall are also producing.

Rumors surfaced earlier this year that Chris Pratt was in talks to co-star. While a deal hasn’t closed, sources say Pratt remains talks to board the project.

The film is based on adaptation of the illustrated novel by Simon Stålenhag and is set in a retro-futuristic past, where an orphaned teenager (Brown) traverses the American West with a sweet but mysterious robot and an eccentric drifter in search of her younger brother. Angela Russo-Otstot, Jake Aust, Geoff Haley, Markus and McFeely are exec producing.

Deadline broke the news about the Russos teaming with Brown at the end of 2020 when Universal was circling the package. When deals couldn’t be made, Netflix moved in fast to land the rights given their strong ties to both Brown and the Russos. The siblings’ upcoming feature The Gray Man starring Ryan Gosling and Chris Evans bows next month and remains one of the biggest tentpoles Netflix has greenlit to date. That film bows in theaters July 15 and on the streamer the following week.

Netflix has been circling the project since the top of the year, but key was lining up schedules for the Russos and Brown. With deals now closed, the film is looking at a fall start date. While an exact number is unknown for the budget, sources say it will rival what Netflix spent on Gray Man given the film’s scope.

Brown is coming off her acclaimed performance in the fourth season of Netflix’s Stranger Things, which officially became the biggest series in the streamer’s history following its premiere over Memorial Day weekend. The conclusion, Volume 2, bows Friday. Brown also has the Netflix action-adventure pic Damsel coming up, as well as Enola Holmes 2.

Besides The Gray Man, the Russos and AGBO have continued their partnership with Netflix as they recently finished production on the sequel to Extraction with Chris Hemsworth reprising his role. AGBO is producing.

Brown is repped by WME. The Russos are repped by CAA.