- Distributor A24 expanding film to 2,000 theaters this weekend 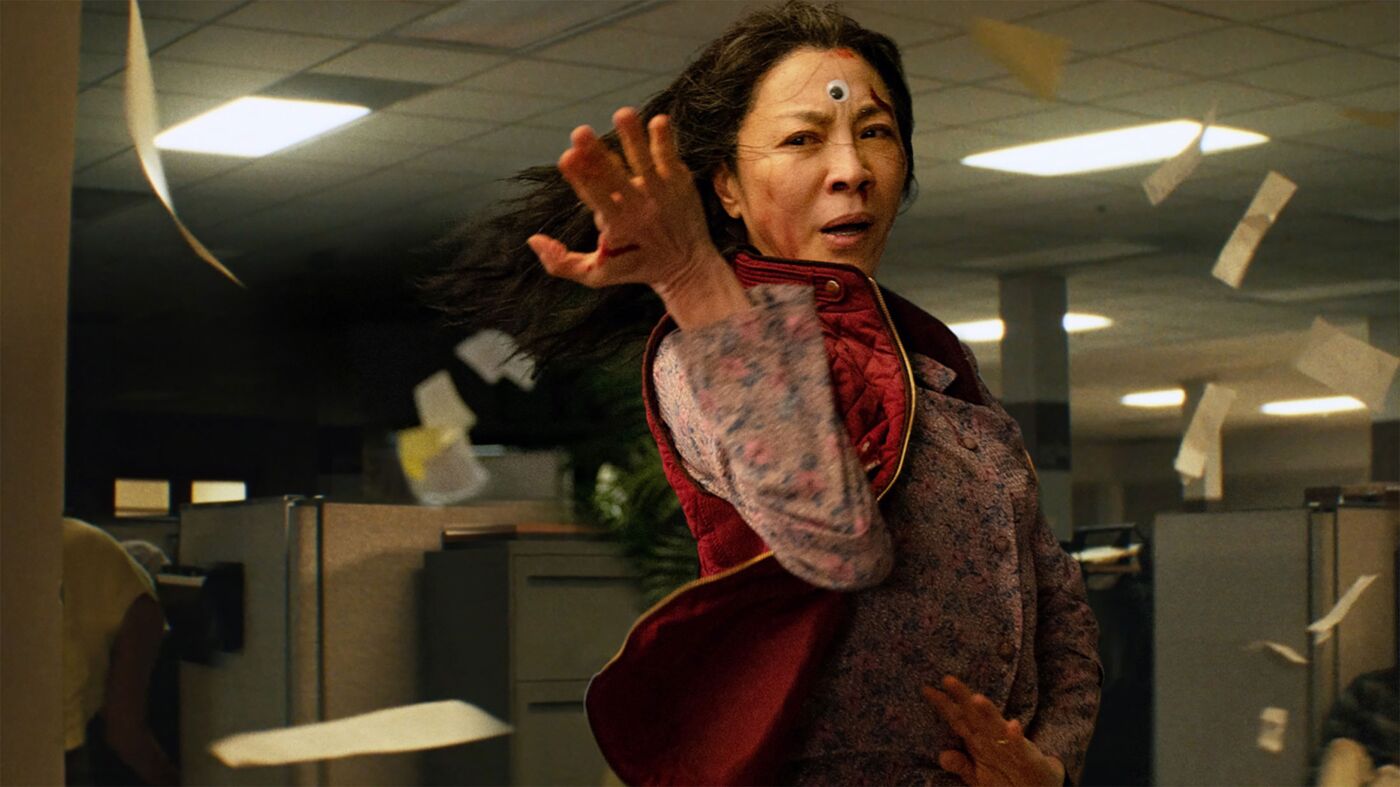 Michelle Yeoh as Evelyn Wang in “Everything Everywhere All At Once.”Photographer: David Bornfriend/A24/Everett Collection

Mark Anastasio, who books movies for the Coolidge Corner Theatre in Brookline, Massachusetts, knew something was up when fans filled the seats for “Everything Everywhere All at Once.”

Demand for tickets to the off-beat, sci-fi picture from A24 studios was so high that he had to add showings at his four-screen theater, which had sat mostly empty for a year and a half during the pandemic. It was just like “The Batman” a few weeks earlier.

“It really has people going wild,” Anastasio said in an interview. “The fact that an independent film, like, an original concept film, is doing just as well here as a franchise property like ‘The Batman’ just speaks volumes.”

To Anastasio, the film is a ray of sunshine that has broken through the gloom of the movie business. Fans are so enthused about the picture -- featuring a middle-aged Asian woman who battles a dark force across multiple universes while trying to finish her taxes -- that they’ve hollered at the screen.

The picture’s initial success is also defying conventional wisdom. Both industry insiders and observers have been proclaiming people will only fill theaters again for superhero epics. Instead, a weird, small-budget film without any household names on the marquee took in an astonishing $50,130 per theater when it opened in 10 locations three weeks ago, the most of any picture this year. That’s also better than Walt Disney Co.’s “The Avengers,” which debuted in more than 4,300 cinemas in 2012.

“Everything Everywhere” stars 59-year-old Michelle Yeoh as Chinese-speaking laundromat owner and kung fu master Evelyn Wang. The writer-director duo Dan Kwan and Daniel Scheinert send her on a multidimensional adventure using her skills to enrich her relationship with her daughter, Joy, played by Stephanie Hsu.

Before the rise of Netflix Inc., critically acclaimed movies with no ties to the comic-book world or long-running film series, like “Everything Everywhere,” regularly succeeded financially. Between 1990 and 2010, all but six best picture Oscar winners generated $100 million or more in U.S. and Canadian ticket sales. Since then, only one film, the 2012 Warner Bros. movie “Argo,” has made that much.

The two most recent winners, Disney’s “Nomadland” and Apple Inc.’s “CODA,” were distributed primarily on streaming services to capture more pandemic-conscious movie fans. Neither made much at the box office. Producer Joe Russo, who worked on “Everything Everywhere” through AGBO, the company he operates with his brother, Anthony, called the movie a “beacon” for independent filmmakers who want to premiere their projects on the big screen.

“It’s a much tougher road to make a movie of this scale and get it released theatrically,” he said in an interview. “Covid reinforced habits that help digital distribution.”

The real test for “Everything Everywhere” will be in coming weeks. After opening the film in 10 theaters, A24 expanded distribution to 1,250 locations, where it has generated about $8.4 million in total domestic ticket sales and climbed to No. 6 in the standings last weekend. It will expand again this weekend, appearing in 2,000 domestic theaters and in Australia and New Zealand, A24 said. The movie cost about $20 million to make.

It will be up against franchise movies that have dominated the Covid-era box office, including the Warner Bros. Harry Potter installment “Fantastic Beasts: The Secrets of Dumbledore,” and “Sonic the Hedgehog 2” from Paramount Pictures. 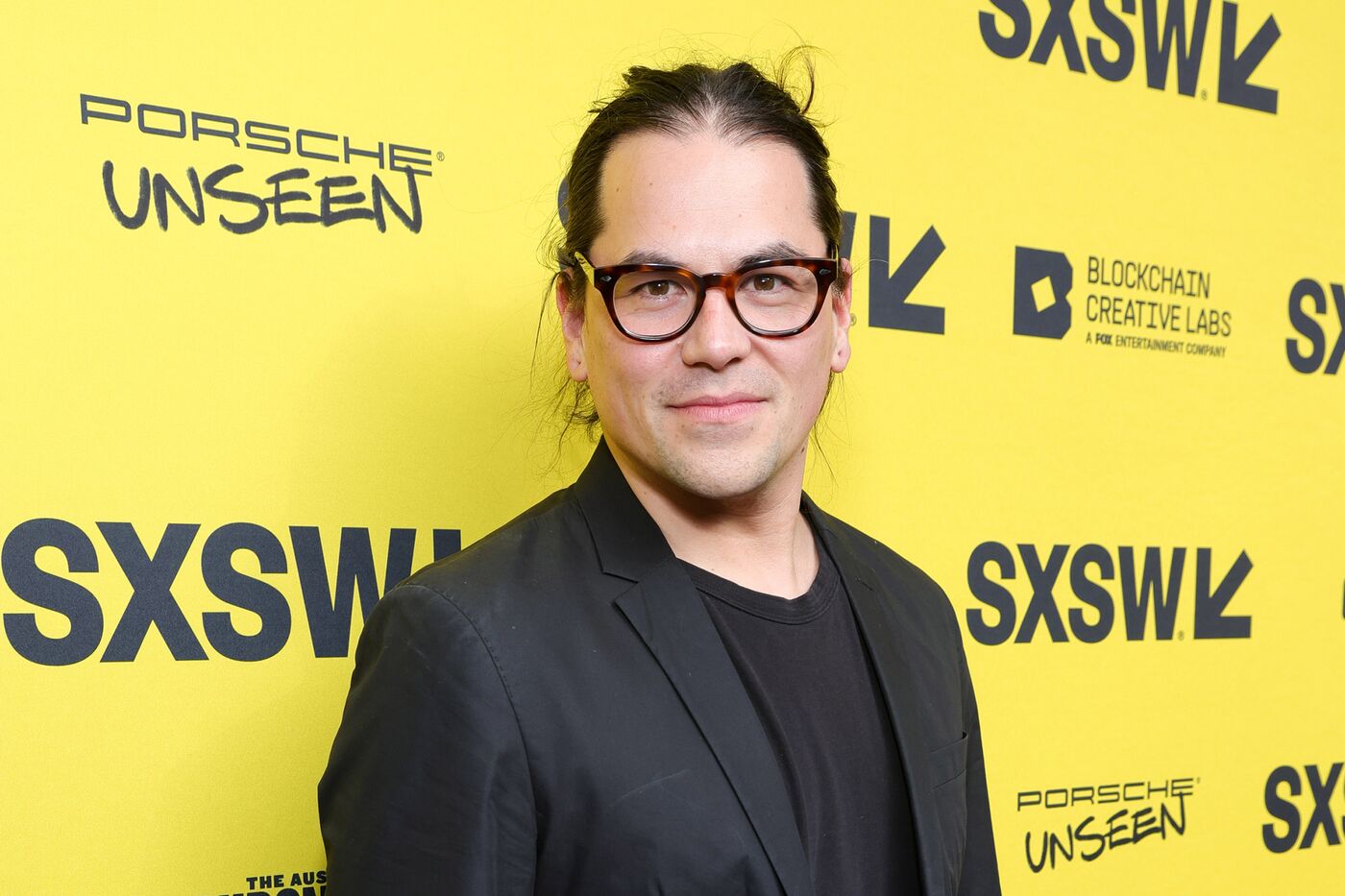 Jonathan Wang / Photographer: Rich Fury/Getty Images
Jonathan Wang, one of the film’s producers, said in an interview that several factors are working in favor of “Everything Everywhere,” despite the commercial gauntlet it faces. The movie is generating significant, can’t-be-bought buzz from excited fans. It had a 96% positive rating on Rotten Tomatoes as of Thursday. And it’s out at a time when more movie lovers are again comfortable visiting the theater.
That might give a better shot to the next noncomic-book movie made by a filmmaker determined to eschew conventional wisdom about what belongs in the theater.
“It’s very difficult, currently, to not create from a place of fear, or pandering, or reaction, or appealing to whatever will be the cheapest dopamine hit,” Wang said. “It takes extra effort.”